There are two big events this weekend that should get the attention of both the walking crowd and those speedier trail runners. Saturday, May 21st in the middle of the state is the return of the NJ2NY50—a 50 mile, one day, walk from Metropark to New York City celebrating the East Coast Greenway. In Essex County, there is also the 2nd Annual Mayapple Festival in South Mountain Reservation, featuring much shorter walks around the park trails, but also an ultra-marathon in distances from 100k to a shorter 10mile trail race. 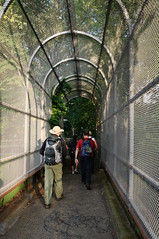 The NJ2NY50 is a 50 mile walk along the East Coast Greenway and Liberty Water Gap Trails from NJ Transit’s Metropark Station in Iselin to New York City (via short ‘hike’ on the PATH) and continuing the walk on the east side to Penn Station (where you can get a train back to the starting point). The hike goes through some suburban and more urban areas, but also meets up with the Hudson and some nice views across the river at New York and then back at New Jersey.

This event is part of the ongoing Cross-Jersey Walking Challenge, a trek of 100 total miles from Trenton to NYC, and organized by the same folks that brought you last fall’s Lenape Trail thru hike.

50 miles along trails and sidewalks wasn’t insane enough for you the trail runners in South Mountain Reservation will be looping around the park to race in distances up to 100k in the 2011 Mayapple Ultra. If you’re interested, race registrations close Wednesday 5/18. 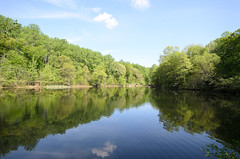 For those not interested in running (and I don’t blame you!) the Mayapple Festival event caters to families, walkers, hikers and nature lovers of all types with an art fair, guided hikes to Hemlock Falls or through the wildflower preserve, and, as an addition this year, live music all afternoon in the Summit. Having missed the festival last year, I’ll be around this year with a camera over my shoulder checking out a little bit of everything.

For more information on the Mayapple Festival, and directions to South Orange, NJ, see the South Mountain Conservancy, or the official Facebook event page.

How will you be enjoying the local parks this weekend? Attending one of these events? Have plans for another trip or event?